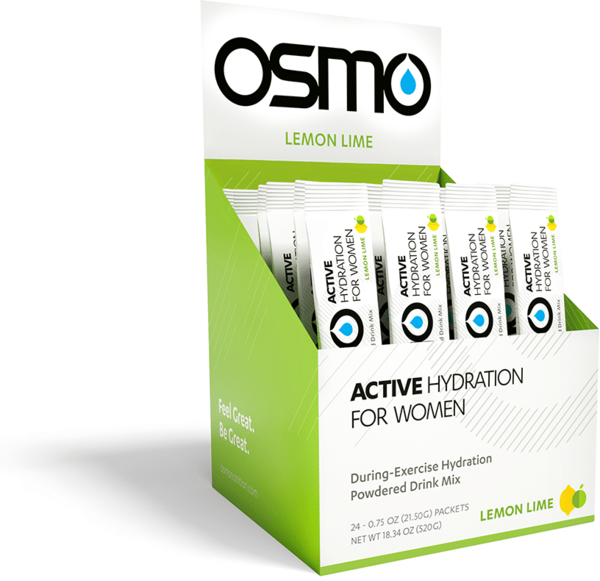 Osmo Active Hydration for Women is a during exercise hydration drink that was scientifically developed to be the fastest way for women to rehydrate.

During the full menstrual cycle, internal temperature varies by 0.5°C, while sodium losses increase and plasma volume drops. Osmo Active Hydration for Women was developed based on peer-reviewed science to address these physiological realities and to help female athletes:

Women Are Not Small Men

Throughout the history of sports medicine research (and even primary medical research), study participants have primarily been 18- to 22-year-old men. Most of the scientific community believed that the findings from this research were applicable for women. They are not. Women have been excluded from this human performance research in the past because hormonal fluctuations during the menstrual cycle impact performance. In short, women were considered “too difficult” to include as participants in the studies. The same fluctuations of hormones that alter physiological responses to exercise, metabolism, recovery, and training that present challenges for researchers create challenges for female athletes.

We saw these challenges as opportunities to better serve female athletes.

There is now solid research that is specific to women and their physiological differences. By knowing the differences between female and male athletes, every athlete can achieve their true potential by applying sex-specific methods and recommendations, including nutrition.

During the menstrual cycle, women have two hormone phases: high and low. During the high hormone phase, estrogen reduces the availability of carbohydrate and increases the amount of fat used for fuel; thus women have problems hitting high intensities. Elevated progesterone increases our core temperature by ~0.5’C, increases total body sodium losses, and increases muscle breakdown (and at the same time, reduces the body’s ability to rebuild muscle). If this wasn’t enough, the combination of elevated estrogen and progesterone drops available plasma volume by ~8%, which reduces heart-stroke volume, thereby reducing oxygen available for aerobic metabolism.

Based on peer-reviewed science, including research done by Dr. Stacy Sims, who developed all of the Osmo products, we have developed three products to help female athletes feel and perform their best by addressing these physiological realities.

To maximize and sustain power, stay hydrated. As body-water drops, so does aerobic power; by the time you’re thirsty you’re already about 2% below optimal body water, which can result in an 11% reduction in power output.

As endurance athletes, our bodies produce power through aerobic metabolism. Aerobic metabolism requires oxygen-rich blood to flow to the muscles. As body-water drops (due to perspiration and respiration), blood “thickens”, which reduces heart-stroke volume. This means that if you don’t start your effort hydrated, you won’t be performing at your best. If you don’t replace body water rapidly during your workout, your heart rate can hold steady (or even rise), but power will drop (known as “Cardiac Drift”).

In many cases, an athlete’s rate of fluid loss is greater than their body’s ability to replace it orally.  What this all means is 1) you should start your workout fully hydrated, 2) you can’t wait until you’re thirsty before you start drinking, and 3) you should be drinking Osmo Active Hydration, because it’s been developed to be the fastest way to replace body-water orally.

How is Osmo so fast at replacing body-water?

To answer this question, we want to tell you about an American Chemist named Dr. Robert K. Crane. In 1960, Crane presented his discovery of the sodium-glucose cotransport system. Later, The Lancet called Crane’s discovery “…the most important medical advance this century.”

In plain language, when glucose and sodium are present in the small intestine, water is drawn into the bloodstream at a much faster rate.

Crane’s scientific cotransport discovery paved the way for Osmo Active Hydration. We have studied, tested and perfected the science of oral rehydration, honing the ratio of sodium (and other electrolytes), glucose and the other natural and organic ingredients to maximize the rate of fluid absorption and palatability.